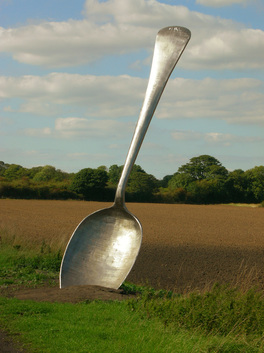 Motto: Life's a Beach and we're just playing in the Sand.

​Sup, my name is Gene. I was born in Santa Clara, Ca, but was raised in west Oakland and Daly City. There's not much to me but school, music, and video games. I'm just getting through life like everyone else and hopefully end up somewhere nice.  What community is to me is it's a group. A group of people you have a common relation with. There's multiple communities out there and many that you can be part of. 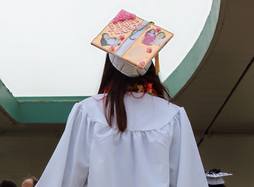 My name is Bernadette or "Bernee" for short. I was born in San Francisco and raised in South San Francisco. I am 18 years old and when I turned 18, I was fortunate enough to have a Debut which is a coming of age celebration for when a Filipina enters adulthood. I'm on my third semester at Skyline and I'm a Business major. I am one of the youngest of four sisters and both of my parents are from the Philippines. I'm very family oriented so my family are the people I spend the majority of my time with. Growing up, my parents didn't really expose me to much of my own culture which is why I've been taking Kababayan classes for the past three semesters in order to find out more things about myself and the history of my people.

Community to me is almost like family. It's people who accept each other's similarities and differences and help each other where they see fit. They are the ones you can always go to who will push you in order to achieve something greater than you imagined. 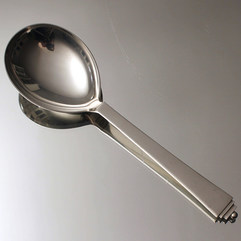 My name is Kyle. I was born in Daly City but growing up I always moved around due to my parents. I am the eldest out of 3 siblings. Being the eldest has many responsibilities like having to set examples for my younger siblings and being someone they could look up to. As of right now, I am undecided in what I want to major in, which is why I am at Skyline. Like many others, I am still trying to figure out what I want to do for a career and thinking about it scares me. To me, community is a group of people who share the same interests and beliefs. Community affects your growth as a person whether it be positive or negative.

Community
​
Throughout my life, there are many who helped me get to the point where I am today. They helped me grow, mature, and guided me to rise to my full potential in life. Those are the ones I consider my community. In my personal opinion, a community is a group of people who help one another grow and rise. They are the ones who support you and guide you to be better than you were the day before. My family, Close friends, teachers, professors, coaches and many more are all part of mine. They are the ones who were there for me from the start. They motivated me, inspired me, and guided me throughout my life. 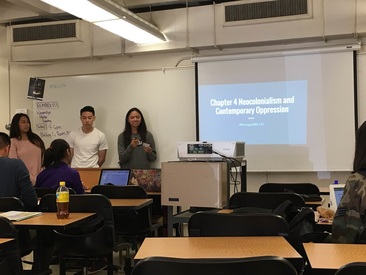 On Thursday, October 6, the barangay "B.R.C.C.D" presented their chapter of Brown Skin, White Minds. They covered chapter four which focused on Neocolonialism and Contemporary Oppression. They taught us about how Filipinos were one of the first asians to land on American soil, settled in Louisiana and were colonized to think that being white was superior. They expressed great emphasis on the words oppression, discrimination, racism and racial micro-aggression for the activity they arranged for the class where each barangay had to come up with a skit that clearly represented the word that B.R.C.C.D chose for us. It was definitely a fun activity and it helped us gain a better understanding between the words because of it's similar meanings. In the end, my group and I, Leche Clan, were able to win the prize with our skit. 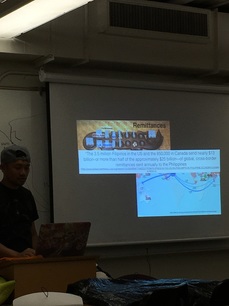 During class on October 6th, our professor, Roderick , lectured the class about migration. Focusing on the reasons why these people from poor countries go to wealthier countries, especially Filipino/Americans. He explained how people migrated due to droughts, not having enough money for their families, and imperialist taking over their countries. Leaving their countries forcing them to make the decision of where to live. Filipinos decided to migrate choosing certain places due to many reasons like town networks, type of jobs, family networks, and affordability. He talked about how these other countries destabilized the smaller/weaker countries, like the Philippines.
-Kyle Bondoc
​

During class on October 6th, Professor Rod separated his class into four different groups. Where they then must present and demonstrate a way that shows what Immigrants, who are provided with lesser opportunities here in the United States are going through. Out of the four groups, one demonstrated this by doing a very unique but yet very relevant skit, that perfectly portrays what Immigrant families here in the United States are going through on a daily. In their skit they used three characters who play a big role to show the true emotions of what they go through. Two students played as a son and a mother and the other played as a cashier. The skit was about how the young boy wanted to replace his phone with a new iphone because his was all broken up. Although the phone he had was working perfectly fine, he still begged his mom for the one. The mom asked for the price and realized the price of the phone was literally all the money she had in her wallet. Trying to show her son how much she cares and loves for him she decides to buy the phone, even though that was all the money she had. This shows how much sacrifice many immigrant parents have to go through in order for their child to feel they belong in this world. They sacrifice blood, sweat, and tears for their kids to one day have a future in this country, although they fear for their own.

What it means to us

During class on Oct. 6th, Prof. Rod broke our class into four groups. Each group had to come up with a skit, poem, etc. reflecting how Filipinos came to america, who paid, and who was the first in your family to come to america. With our class, Haiku is are our favorite types of poems, so three out of the four groups made a haiku. Each group presented there haiku in different ways. One group presented it by each member reading a part of the poem, others had a certain tone when reading their haiku, and etc. As you can see in the pictures, most Filipinos came here, to america in search for a better life and it was mostly one person from their family who came to america first and started bringing everyone from the family, still to this day, there are still people trying to bring their family over from the Philippines. 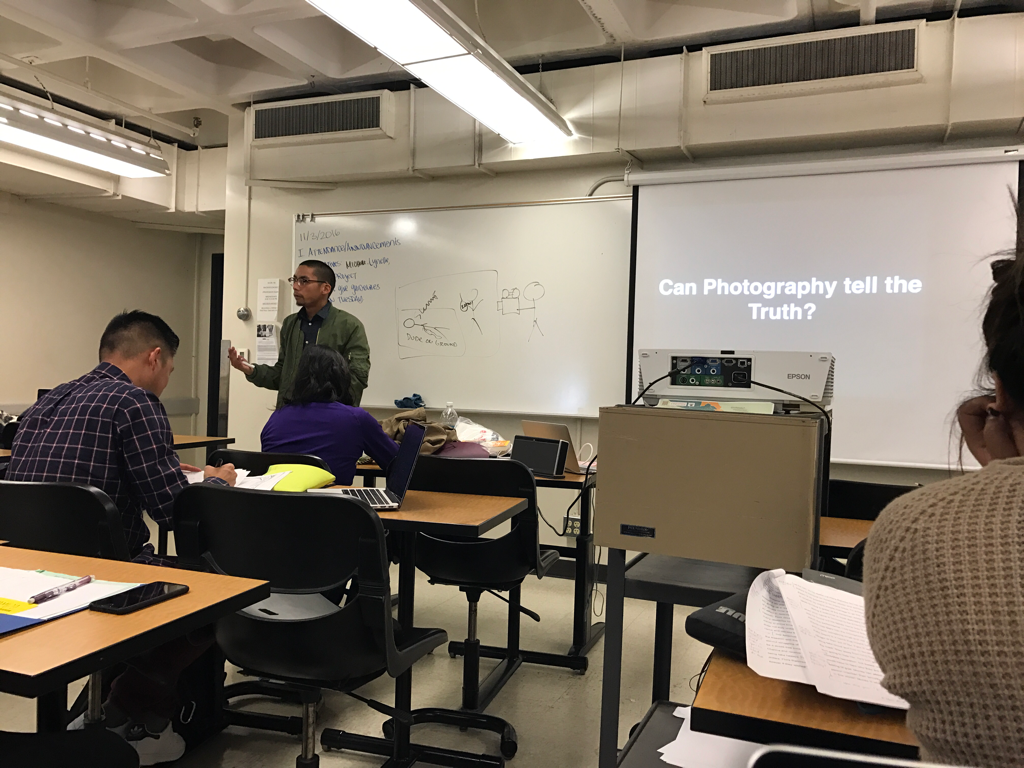 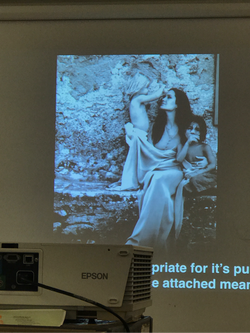 Photography doesn't really have a exact definition, nor does it have to portray a certain image. The best thing about photography, stated by Jeremy, is the fact that one picture can hold 1000 words. One may see a picture one way, and another may see it the complete opposite. The beauty in photography is not what's in the photo, but what the photo means and portrays for many. It's the connection people feel that make photography important. The connection
During class, we viewed some photography done by Jeremy. 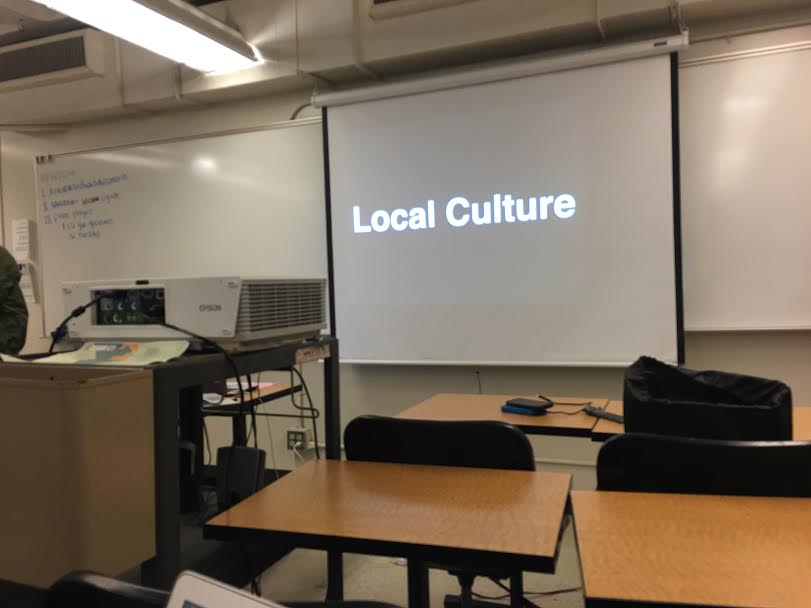